Last week I blogged about clothes dryer ducts, and this week I’m going to follow up with information on dryer transition ducts.  As I mentioned last week, a dryer transition duct is the flexible material that can be used to transition between the dryer and the duct.  Transition ducts should be used sparingly, stretched tight, not smashed, and replaced periodically.    They’re allowed by the Minnesota State Mechanical Code, but they can’t be any longer than 8′, and they need to be listed and labeled for the application.  The key word is listed.   If a dryer transition duct is listed, you’ll find the “UL” logo somewhere on the package or product.

Plastic dryer transition ducts are a potential fire hazard.  They’re never UL listed, they can get clogged with lint, and they’ll burn.  If you have one of these, replace it.  I looked for one of these at Home Depot and Menards, but I couldn’t find one.  Good.  I still find plenty of them while inspecting houses though. 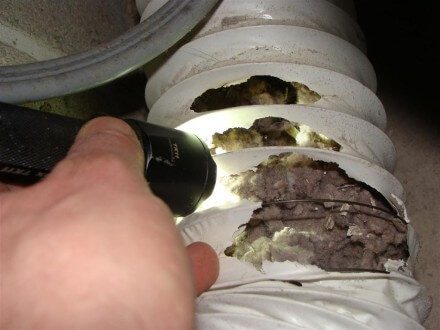 I tried lighting some paper on fire inside one of these plastic ducts to see how fast it would burn through, and the plastic itself actually caught on fire.

Foil dryer transition ducts are typically UL Listed, and they’re readily available at any home improvement store.  While these products are allowed by code, I’ve heard that many municipal inspectors won’t allow them, and most manufacturers of clothes dryers don’t recommend them either. 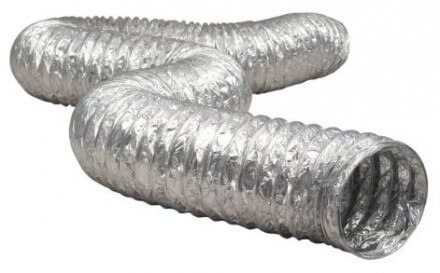 I tried burning one of the UL Listed foil ducts by filling it up with shredded paper, then lighting the paper.  Once the paper caught fire, I accelerated the burn by aiming the blower end of a wet/dry vac at the tube.  Some people claim that these foil ducts are flammable, but that’s not true; there are two versions of the foil dryer transition ducts – a listed and a non-listed version.  That’s the listed version shown in the photo below.  After heavy white smoke started pouring out the end, it took about 10 seconds for the flames to rip through the side. 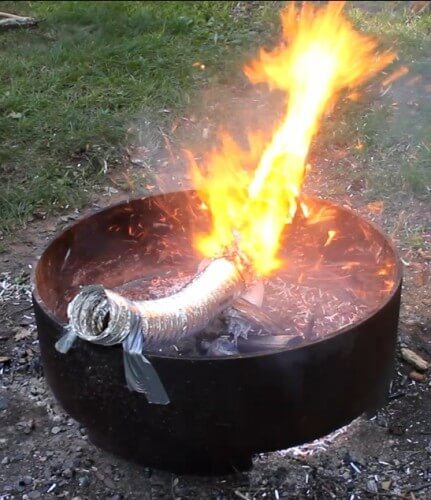 Semi-rigid metal dryer transition ducts are available anywhere dryer duct materials are sold, but it’s almost impossible to find a UL Listed version of this.  The strange thing is that these semi-rigid ducts seem to be universally accepted by building code officials, and they’re recommended by clothes dryer manufacturers.  Everyone seems to like these, but they have their drawbacks: they puncture easily, they crush easily, they unravel easily, and they have very sharp edges.  I repeat, very sharp edges.

I sent out emails to several major clothes dryer manufacturers, asking what consumers are supposed to use for a dryer transition duct, because there doesn’t seem to be a UL listed semi-rigid duct.  Finally, a very helpful person at Whirlpool by the name of Lee Herendeen sent me a link to just such a product, made by Lambro Industries, Inc.  After all the searching I had been doing, I was skeptical that this was the real thing, so I ordered one.  It’s the real thing.

The photo below shows the UL listed semi-rigid duct from Lambro sitting next to a non-listed duct. 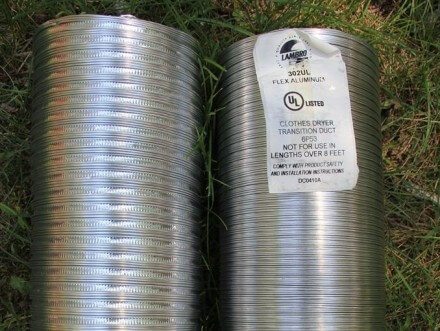 The UL listed duct was much stiffer than the non-listed duct, and was much more difficult to crush.   To continue my comparison of transition ducts, I stuffed them both full of shredded paper, lit the paper on fire, then aimed the exhaust from a wet/dry vac in to the duct to simulate the air from a clothes dryer.

I started with the non-listed duct.

At about the 40 second mark, heavy smoke started to come out the back side of the duct.  About 17 seconds later the fire burned through the duct.

The next test was to try the same thing with the UL Listed duct.

With this one, heavy smoke started coming out at about the 30 second mark, and it took about 27 seconds for the fire to burn through the duct.  Of course these aren’t ‘real life’ tests of a dryer duct fire, but it’s interesting to compare the performance of the different materials.

Don’t use plastic for your dryer duct.  It’s flammable.

Foil comes in a UL Listed flavor and is easy to work with, but it’s prohibited by many building code officials and clothes dryer manufacturers.

Semi-rigid aluminum is good, but it’s a hassle to work with.  If you’re going to use semi-rigid, use the UL listed version.

Next year I might check out a product called DryerFlex.  They claim their product offers the best of both worlds.  We’ll see.

Post edit 9/11/12: I tested it out, and it beat the pants off everything else.  This is a far superior product.  http://www.structuretech1.com/2012/09/dryerflex-a-superior-dryer-transition-duct/