Back in 2009, I wrote a blog post giving some basic information on how to fix ungrounded three-prong outlets.  The information in that post is still mostly applicable today, but there are few nitty-gritty details missing from that post, and there have been a few code changes since I wrote that, making the repair for an ungrounded three-prong a little bit more complicated.

Disclaimer: this blog post gives an overview of how to repair an ungrounded three-prong outlet.  This is not a DIY guide for handy homeowners.  If you’re not qualified to do electrical work, don’t do it.  You could kill yourself or burn your house down.

To start off, the third prong on a plug is for the ground wire, and its job is to bond electrical components.  Under normal conditions, there should never be any current on the ground wire.  Think of it as an emergency lane on the highway; things should work just fine without it, but when something goes wrong, you better have it.  If a three-prong outlet is installed with only two wires and no grounding path, we call it an ungrounded three-prong outlet.  This is a common defect at old houses, and sometimes at newer homes where some hack has been messing with the wiring.  An ungrounded three-prong outlet increases the potential for shocks or electrocution, and prevents surge protectors from doing their job, which may allow for damage to electronic components.

Any cheap electrical tester will identify an ungrounded three-prong outlet, unless someone really went out of their way to fool the three-prong tester, which would be highly unethical and dangerous.  I’m not going to explain how that’s done.

So anyway, back to repairing an ungrounded three-prong outlet.  The electrical code gives several options for this repair, which are listed under section 406.4(D) of the 2014 National Electric Code (NEC).

If a ground path exists, you need to use it.  NEC Section 406.4(D)(1) says that if a grounding path exists, it needs to be used.  Ground paths have been required throughout homes since 1962.   This means that the only acceptable repair for an ungrounded outlet in a home built after 1962 is to ground the outlet.  If no ground path exists on a home this age, someone really screwed up.  In my old post on fixing ungrounded outlets, I show how to use a two-lead tester to see if the electrical box is grounded.

If the metal box is properly grounded, the most common way of grounding the outlet to the box is to simply connect a wire to the box, as shown below.  This is called an equipment bonding jumper. 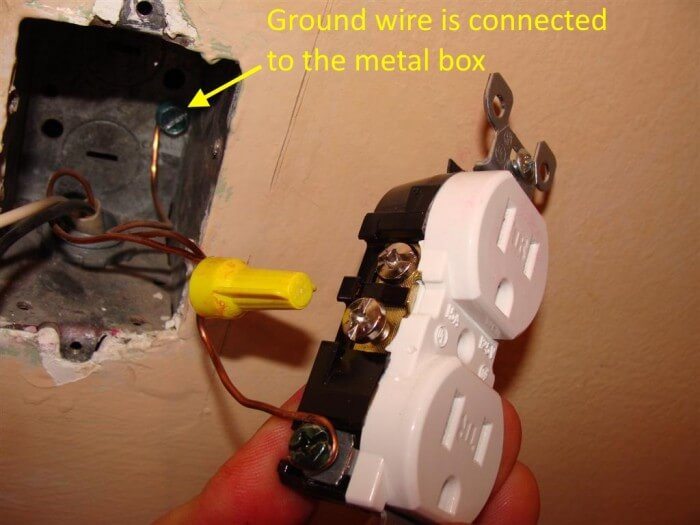 There are other methods listed under section 250.146 of the NEC, but I’m not going to try explaining those.

2. Install a GFCI outlet.  A GFCI outlet will help to prevent electrocution, but it won’t help surge protectors do their job.  If this is done, a sticker needs to be applied to the face of the GFCI outlet that says “No Equipment Ground”.

3. Install a standard three-prong outlet and add GFCI protection.  GFCI protection can be installed at the breaker panel, or somewhere between the breaker panel and the outlet.  When this is done, labels need to be applied to the outlet that say “GFCI Protected” and “No Equipment Ground”.  That’s why GFCI outlets come with a bunch of these labels. 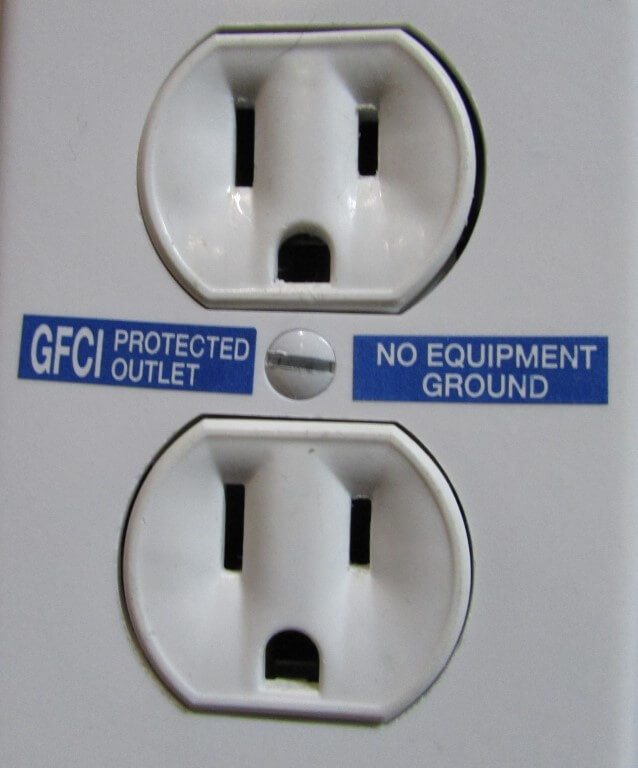 The part that makes all of this a bit more complicated is that as of January 1st, 2014, most replacement outlets in homes need to have AFCI protection.  If the main electric panel in the home is too old to allow for the installation of AFCI circuit breakers, it gets really interesting.  It’s stuff like this that makes me really glad to be a home inspector; I get to say “have an electrican fix it”.  I don’t have to design the exact repairs.