If you’re buying a house in the Twin Cities with pipes sticking up out of the ground in the yard, heads up. You probably have a fuel oil tank somewhere at the property. While most homes in the Twin Cities are heated with natural gas, there is still a small percentage of homes in the metro area that are heated with fuel oil, and there are tons of houses with abandoned fuel oil tanks.

When a home gets converted from fuel oil to natural gas, the fuel oil tank becomes abandoned. Once the tank is abandoned, it needs to be dealt with.

When tanks are abandoned

When a fuel oil tank is buried, it needs to be removed or filled in place when it becomes abandoned. If a fuel oil tank is left buried, it could eventually leak. A leaking underground storage tank (LUST) can contaminate the soil as well as the home, creating an environmental hazard that can cost a ridiculous amount of money to clean up. You can visit the EPA’s web site on LUSTs for more info.

When a tank is located inside the house but not buried, it needs to be properly disconnected, and sometimes removed. 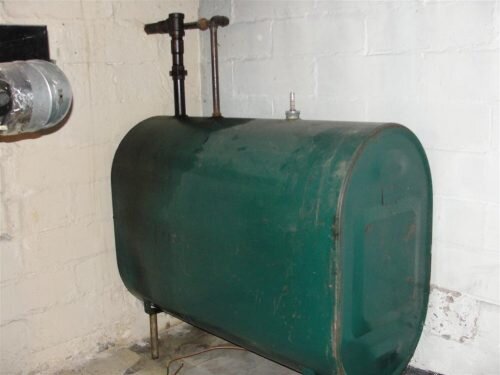 A fuel oil tank takes up a large amount of room, so most people choose to have them removed, but requirements vary from city to city. For example, once a fuel oil tank is abandoned in Minneapolis, it needs to be removed from the property. This is written into their Truth-In-Sale of Housing Evaluator Guidelines under item #25.  The guidelines state:

“The evaluator shall determine if there are any abandoned fuel oil tanks. If found, mark as RRP or RRE. A licensed contractor must properly remove them. (A permit is not needed if the tank is less than 200 gallons.). (Per Uniform Fire Code Sec. 79 and Mpls. Code 48.145)”

I don’t think I’ve ever seen a fuel oil tank that was less than 200 gallons. The tank pictured above is a common 275-gallon indoor tank.

Another option for an abandoned fuel oil tank is to stick it out in your front yard and paint it like a cow. You think I’m kidding, but I’m not. 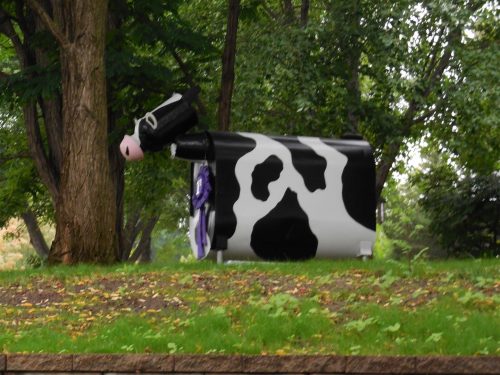 I even had another home inspector share a photo with me where someone did this in a basement. Let the good times roll. 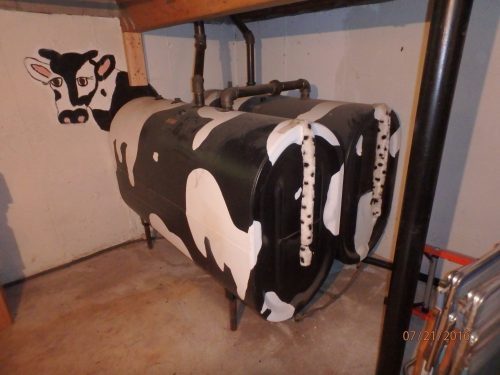 The easiest way to spot a potential buried fuel oil tank is to look for a fill pipe and vent pipe at the exterior of the home. Sometimes the pipes will go through the foundation wall of the home. 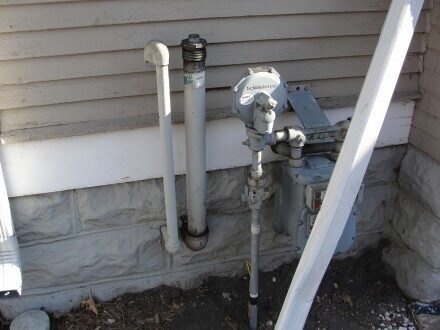 Sometimes they just go down into the ground. 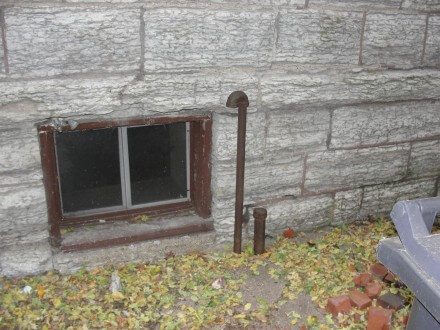 When fuel oil tanks are removed, the fill and vent pipes need to be removed or cut off and filled with concrete.  If you find pipes sticking out of the ground or foundation wall like the ones shown above, it probably means one of two things: either the tank is still there, or it was removed by a hack. No professional fuel oil tank removal contractor is going to leave the vent and fill pipes looking like that.

According to Dean Nething of Dean’s Tanks, there were many ‘erroneous deliveries’ that happened during the 60’s and 70’s, where one house address got confused with another. About once a year, a basement would get contaminated with hundreds of gallons of fuel oil. In every one of these cases, the contamination was so bad that the fuel oil company, Standard Oil, had to buy the property so they could tear it down and dig out the basement. This is why the fill pipes always need to be removed when the tank is removed.

When the pipes are right next to each other like in the photos above, there’s a good chance that the fuel oil tank is (or was) located inside the house or under the house. When the pipes are separated from each other, there’s probably a buried fuel oil tank in the yard.  The photo below came from a house in Minneapolis, and these pipes led to a 1,000-gallon tank buried in the yard. 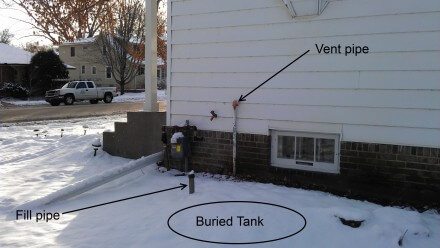 Here’s another example where the fill and vent pipes were located in the front yard behind some bushes at a home in Edina. These innocuous, nearly hidden pipes led to an enormous buried tank in the front yard. 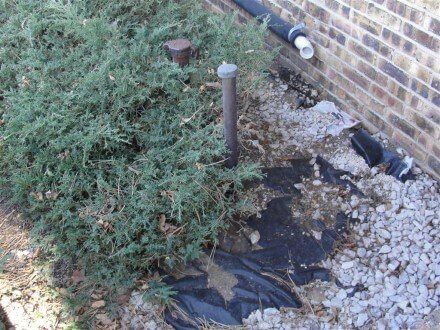 At the home below, there was a subtle vent sticking up out of the ground behind some bushes that led to a buried fuel oil tank. 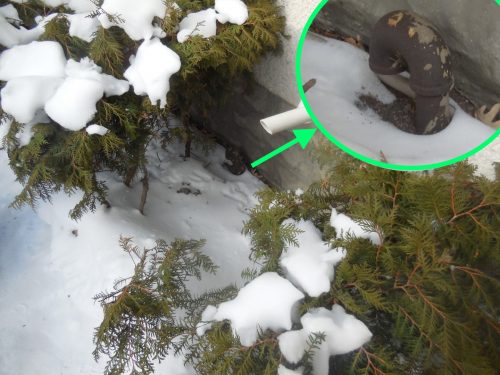 And finally, one of the most non-so-subtle clues that we ever came across was a huge marked-up area on someone’s driveway. 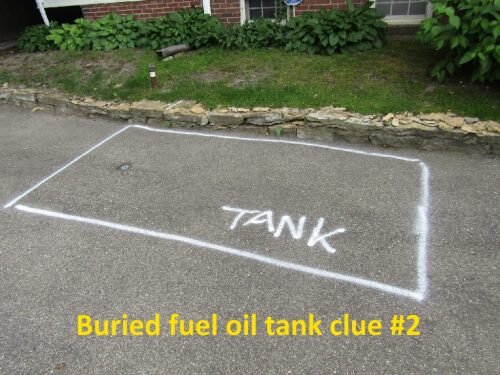 There are a few diagrams floating around online that show an indoor style of tank buried in the ground, like the big green one that I showed at the beginning of this post. That type of indoor tank is extremely unusual to find buried, or according to Dean’s Tank, “once in a blue moon”. The vast majority of buried tanks look a lot more like big drums, like the ones shown below. These photos are courtesy of Dean’s Tank. 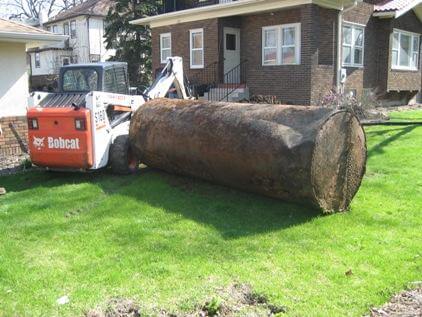 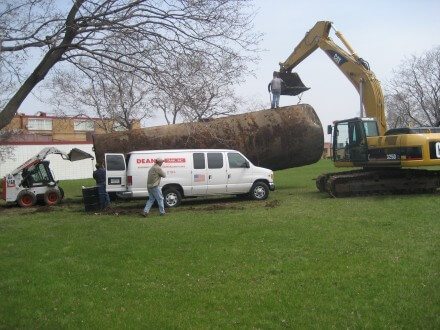 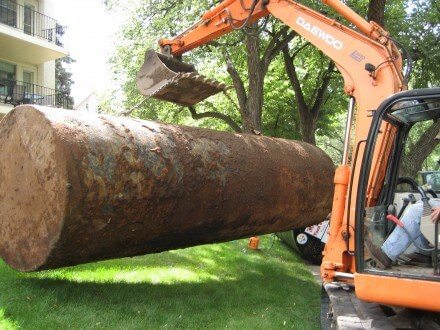 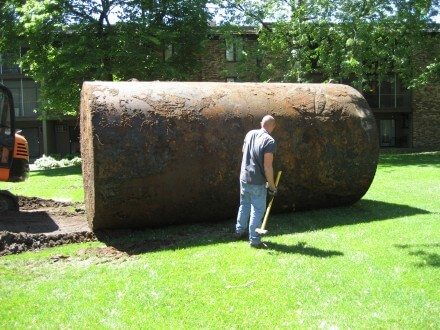 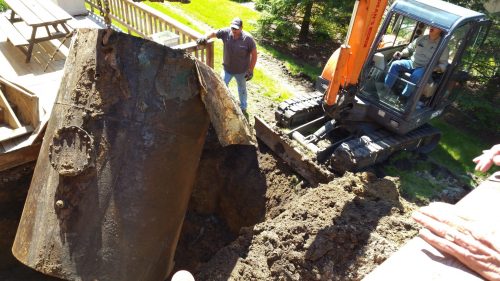 Here’s another example of pipes sticking out of the ground leading to a buried fuel oil tank in the yard. In this particular case, the fill pipe had a cap that could be opened. I stuck my tape measure down the pipe, and it came out soaked in fuel oil. It smelled like fuel oil for the next two weeks, despite my half-hearted efforts to clean it off. Fuel oil has a strong odor, and takes a long time to go away. It’s easy to understand how a leaking tank can create such a nasty problem. 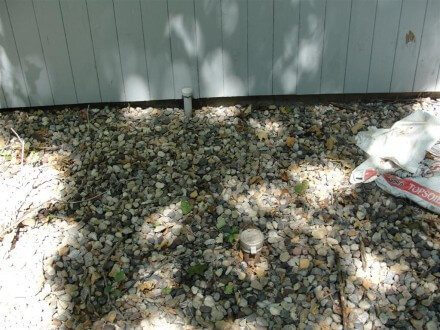 The person buying this home had the sellers remove the tank; here’s what the site looked like after the tank was removed. 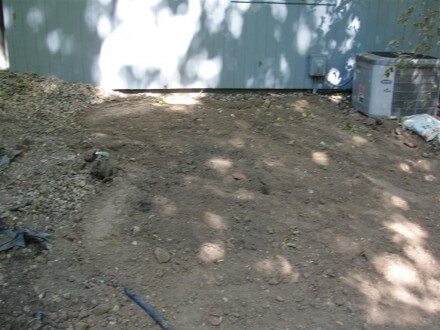 What to do if you suspect a buried oil tank

I asked them what they use to confirm the presence of a buried tank, because I was interested in purchasing some type of high-tech tank locator for myself. How convenient would that be? Dean told me his trick was to put his ear to one of the pipes sticking out of the ground, then bang on the other with a hammer. If there’s a buried tank, it’ll be really obvious. I’ve tried it, and he’s right.

Back when I interviewed Dean for the first time nearly ten years ago, Dean estimated his company had removed between ten and twenty thousand tanks. The cost of removing a buried fuel oil tank varies greatly from property to property, but costs will typically range from $2,000 to $3,000. Having a tank filled in place has a comparable cost.

According to Dean and Minnesota Real Estate Attorney John Braun, some homeowners may qualify for financial assistance through the Abandoned Underground Storage Tank Removal Program, which is run by the Petrofund program at the Minnesota Department of Commerce.

Home Inspection Standards of Practice (SOP) specifically state that buried fuel oil tanks are not something that home inspectors are required to inspect.  Here’s SOP language from the two big home inspection organizations: