One of the standard things home inspectors look at while inspecting an electrical panel is comparing wire sizes to circuit breakers sizes. When a wire is too small for a circuit breaker, you have a potential fire hazard. Circuit breakers protect the wires from overheating. While the true formula for figuring out exactly how much current a wire can carry is fairly complicated, most home inspectors rely on a simplified version of this for branch circuits:

For the full story, you’d have to start with table 310.15(B) (16) in the National Electric Code, but there are a ton of exceptions that make it challenging to fully figure out the exact answer. Thankfully, this simplified chart works for most of the stuff I come across as a home inspector. Wires can be larger, but not smaller than this… for the most part.

One such place where these rules for circuit breakers or fuses don’t apply is for air conditioners and heat pump circuits.

Note: while I say circuit breaker throughout this post, what I really mean is the overcurrent protection device, or OCPD. An OCPD is a generic tongue-twister for a circuit breaker or fuse.

For air conditioners and heat pumps, the only thing we need to look at is what’s printed on the compressor unit. These units all have a label applied to them that tells us the minimum circuit ampacity, and the maximum fuse or circuit breaker size. 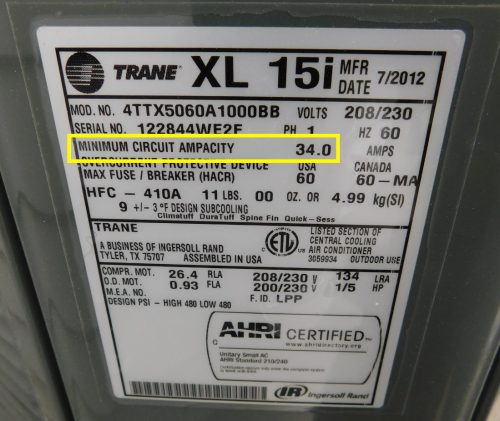 Again, in the case of air conditioners, we don’t need to match up the size of the circuit breaker to the wire sizes. To paraphrase from EIOED, this is because air conditioner compressors contain thermal cutouts designed to help prevent damage to the units, and these would open before it became a problem for the wires.

The minimum circuit ampacity also tells us the minimum size of the circuit breaker; it needs to be sized large enough to help prevent nuisance tripping when the air conditioner first turns on.

To determine the right circuit breaker size for an air conditioner, we look at both the minimum and maximum size allowable. The maximum size will be clearly labeled on the compressor label. In the example below, it’s 60 amps. 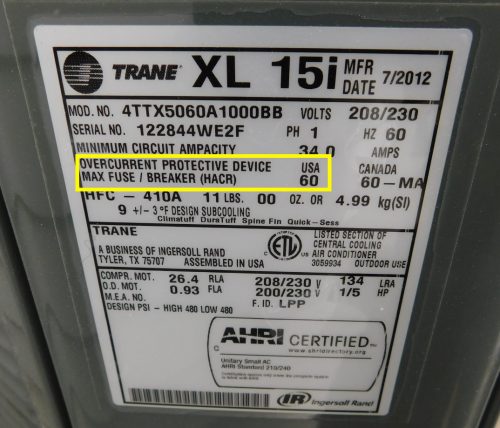 What’s unusual about this number on air conditioner data plates is that it often doesn’t jive with the chart I listed above. I mentioned that the minimum wire size for this air conditioner would have to be 8-gauge, and a 60-amp circuit breaker would normally be too large for that size wire… but it doesn’t matter. It’s ok for this to happen here.

For air conditioners and heat pumps, we size the wires and circuit breakers in accordance with the information printed on the label, not the simplified sizing charts that we typically rely on.